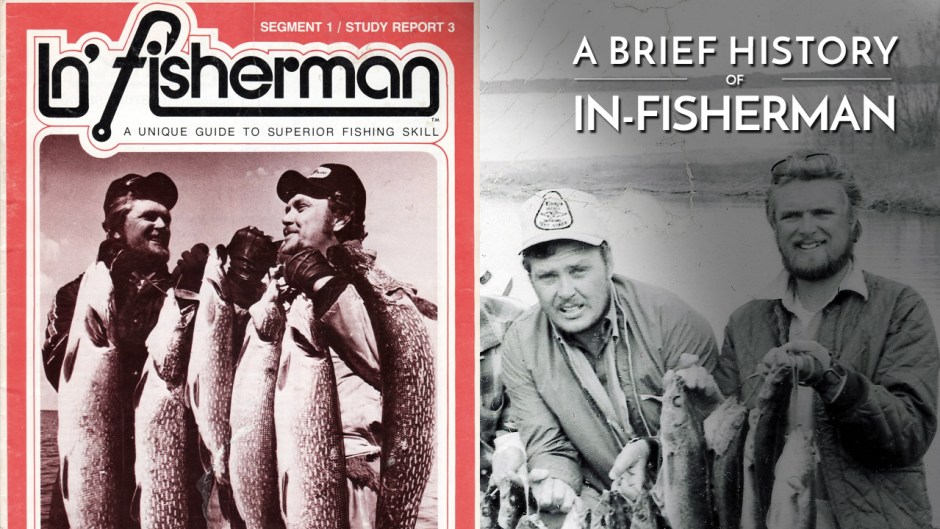 My brothers and I have vivid memories of the stacks and stacks of In-Fisherman Magazine that Grandpa collected. They were placed ever so carefully in medium-sized wicker baskets that lived next to the old wooden rocking chairs in the cabin up North.

Well… it was a “cabin” to us because it was in Wisconsin… but in reality, it was simply Grandpa’s “home away from Illinois”.

We also loved flipping through the pages of these beauties, imagining ourselves pulling giant pike, walleye, smallmouth bass and muskie up from the depths of the chain ‘o lakes – which would be extremely difficult at this time considering we all fished with bobbers, worms and a size 6 Eagle Claw baitholder hook right off the dock in about 4 feet of water.

The covers though, I remember the covers. They were exciting and mysterious and I would flip through the pages looking for more pictures – not so much tips, advice and science. Science?! I got enough of that at school – this was about fishing!

Many great memories were made in the living room, but when anyone mentions In-Fisherman, I think about those wicker baskets next to the rocking chairs…

Al and Ron Lindner also used to vacation in Wisconsin as kids. Bass fishing started for them around this time, and Al avidly read Jason Lucas (who at the time was the only national figure writing about largemouth bass in Sports Afield magazine). While bass weren’t the only fish the brothers chased, this was still an important developmental time for the two young anglers.

We fished a lot in a little lake outside Hayward, Wisconsin, when I was about 5 years old. Ron and I didn’t have a boat, so we ran around in swim suits fishing lily pads and deadfalls from shore. We usually fished with frogs on weedless hooks. Later we used all sorts of artificials.

I remember two particularly big bass. One was a huge fish that Ron hooked on a Johnson Silver Minnow… we finally lost it, but I think that bass was 7 or 8 pounds, one heck of a fish for northern waters.

Another time, on the same lake, I tied into one on a Burke plastic worm with propellers. I lost it in shallow pads. Figure it was a 10. Even if I’m wrong, it was huge!

That lake turned me on to bass fishing. We fished for other species, but bass were exciting. I was pretty good with a jig and a worm when I was 10, long before worms were popular in the North.

Those lost fish are the things that nightmares are made of… sleepless nights… wondering “WHY?! Why did she pop off?!”

Ron too, was knows to ask the question: “why?” He was a fisherman that loved the catch, but was fascinated by theory. In fact, in the book “Largemouth Bass in the 1990s: an In-Fisherman Handbook of Strategies“, it is said that Ron frustrated hundreds of fishing partners, fishing in screwball ways simply to test new theories.

Al on the other hand was more of a results-oriented angler, applying theories when they were shown to help him catch more fish.

These two personalities meshed together, one providing the yin to the other’s yang, allowing the brothers to probe the frontier of fishing in a way that no other single individual could.

In 1970, Al experienced lean times as a guide in the north during the ice season. He decided to make a move, and relocated near Sam Rayburn Lake in Texas. Rayburn was 5 years old at this time, and it was just hitting it’s productive peak – but Al still needed to learn how to target these winter bass in a huge southern reservoir.

He quickly learned just how important timber and creek channels were to bass location. With the help of other guides from Missouri and Arkansas, he mastered deep-water jigging. This method – along with many others associated with Rayburn – allowed the two brothers experience the effectiveness of lures that hadn’t yet reached the north.

So… what better time than now to start a brand new fishing publication?! It was out of this situation that The In-Fisherman Magazine was born. However, it didn’t look like the In-Fisherman we know today – the In-Fisherman that lives in those wicker baskets next to the rocking chair. No, Ron’s original concept was to create a small, focused correspondence course for a select few serious angling subscribers. However, by 1980 the magazine had evolved into so much more than that. It didn’t take long for the information the Lindners were bringing to the table to expand out into radio and television as well, forming the base of the In-Fisherman network. A network that would become In-Fisherman Incorporated, providing a powerful base for fishing education, sustained by contributions from powerful fishing educators.

The development of general principles that aim to help anglers understand both fish and their world take center stage. Without these principles, the sea of “tips & tricks” can become a useless, overwhelming mass.

The network does not limit itself or specialize in a single technique, species or region. Instead, it seeks insight in all aspects of freshwater fishing.

From the beginning, In-Fisherman presented a more comprehensive picture of angling than had been the norm. Instead of focusing on “hot baits” or “hot lakes” and ignoring location and outside factors that could position fish, they provided a more complete picture and developed the formula: F+L+P=S

Finally, by taking a more scientific approach to understanding fish and their environment while still focusing on catching fish (remember, Ron was all about the theory, and Al was all about the results), In-Fisherman was able to bring together recreational anglers, scientists and fishery managers – establishing itself as an authority and helping to promote sound conservation and wise fish management principles – all while teaching people how to fish.

As an adult, I am now a paying subscriber, just like Grandpa was years ago. Doug Stange (the current Editor in Chief at the time of writing) has done an outstanding job of keeping In-Fisherman on the cutting edge of the fishing world with continuous, high-quality information and articles. If you have never cracked the pages and had a look for yourself – I suggest you do so.

NEXT SECTION: Location of Largemouth Bass by Region
PREVIOUS SECTION: How the “Average Fisherman” Benefits from Professional Bass Tournaments