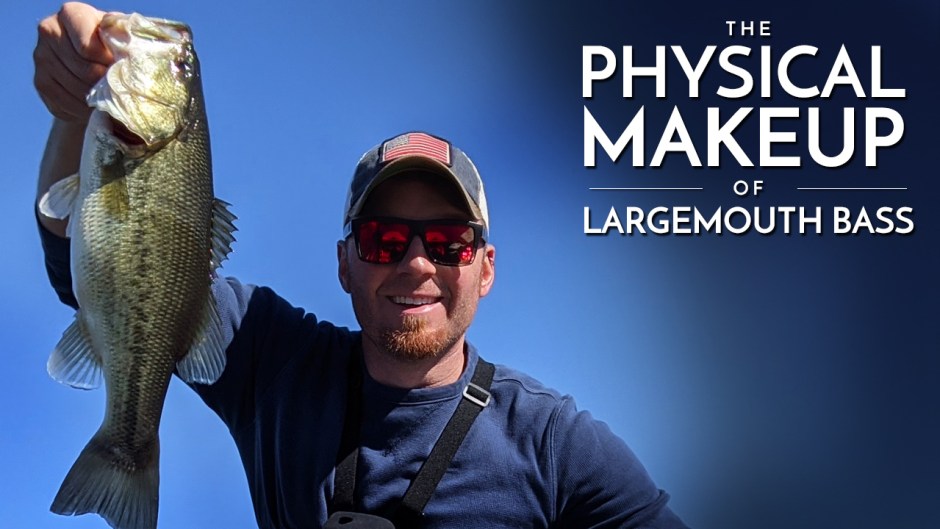 The largemouth bass is a chunky lass. Dummy thicc, if you will. She’s a powerful fish, full of vinegar and whatnot, with a broad body that allows for powerful bursts of speed and tight maneuvering in confined areas.

But shame on me – focusing on the body and passing over the most prominent and definitive feature of this fish:

The largemouth bass doesn’t have sharp teeth like walleye, pike and muskie, but their huge maws easily engulf most prey.

This large mouth is a feeding advantage. When the bass attacks a school of minnows for example, the mouth opens wide and the gills flare – like targeting a dove with a shotgun loaded with bird shot, instead of using a rifle.

One of those two methods is far more efficient.

In addition to the large mouth, she also has a big pot belly. It’s expandable. It stretches. It hangs over her belt. It accommodates a fair amount of… whatever she put in there. This is good, as the largemouth is an opportunistic feeder. When an easy meal approaches, that extra space is put to use.

Bass can catch and swallow a variety of prey types and sizes, but they are limited to what they can fit in their mouth. I’ve used this image too many times lately, but this was what we found on a recent trip around the lake during the cold water period… it shows how far that mouth can stretch, even though this one didn’t stretch quite far enough…

The lower jaw of the largemouth is long and underslung. While this allows them to eat larger prey, it also makes them less adept at snatching food up off the bottom. Smallmouth bass have tweezer-like jaws and a smaller belly, along with a more slender, streamlined body – making them much more efficient at plucking crayfish from crevices.

Studies have suggested that largemouth as most effective when they feed up – however, they will take prey off of the bottom, at mid-depth and on the surface.

Like other sunfish (remember, the largemouth bass is a sunfish) she has adapted well to living in heavy cover, weeds or wood. These areas better suit her than someone like the pike. While pike have missile-shaped bodies and the ability to cover a lot of water very quickly due to their hydrodynamic shape, that do not have the ability to make hairpin turns in confined areas.

Bass can maneuver very well in these areas, and even effectively track and take lures moving erratically in heavy cover. They can quickly change direction while maintaining speed.

5 times faster than you can retrieve a crankbait.

Bass, like many other fish, have scales. These scales offer protection from attacks by predators and parasites, but they prevent the largemouth from sensing their environment through their skin. The skin is an important sensory organ.

Largemouth bass also blend in with their habitat. In most instances they exhibit countershading – their backs are dark, and their bellies light. This helps them blend in with the darker bottom when you look down in the water, but their light bellies blend in better with the surface when you look up at them from below. The body colors are accentuated even further depending on the environment in which the bass is living:

Compare that to this bass taken in the exact same state from a different body of water with thick cover:

The combination of chameleon-like coloring plus countershading offers both protection from predators, and camouflage aiding in their ability to remain undetected by their prey. This is very important as bass are opportunistic predators that will wait to ambush any food that passes by.

Murky water transmits less light. In murky water, bass coloring fades, making them less conspicuous. In the example above, the pit bass lives in very clear water with high visibility, however the bottom is light colored sand. The bass below is also very light colored, but lived in a lake with very poor visibility. So even though the bottom is made up of dark rocks and debris – the water clarity is low – so the bass have lighter coloring.

As a rule of thumb, bass exposed to sunlight in shallow clear water will have darker backs and bright green sides, but bass in deep or turbid water are pale and silvery.

It is also believed that active bass are darker than inactive bass, as their green coloration camouflages them in weedy habitat – especially wherever plankton and algae are present.

The combination of all of these attributes make the largemouth bass an effective predator. One that can survive and adapt to many environments and many different conditions.