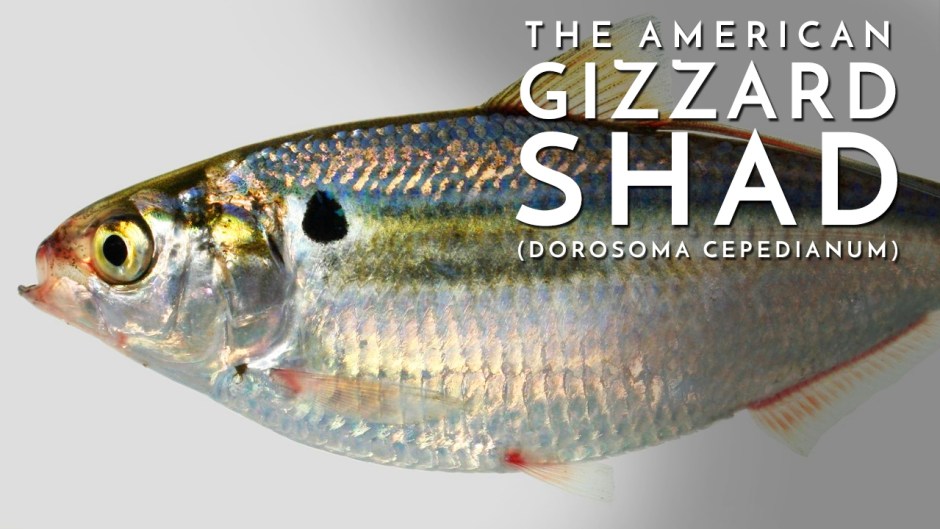 Understanding baitfish is something that can benefit all anglers. Big fish pursue and eat little fish, and while it is more important to find and mimic the local forage – understanding what you are looking at will help you make better decisions faster.

It will help you locate more fish.

If you want to catch the owl… study the mouse.

Let’s take a look at one of the most common baitfish in Illinois:

The American Gizzard Shad (sometimes referred to as the mud shad) is a member of the herring family. Adults have a deep body with a silvery-green back that fades into a pure silver belly.

While these fish commonly reside in freshwater lakes, reservoirs, rivers and streams, they are hearty enough to live in water that is anywhere from clean to brackish. (Brackish means there is some salt present, so this water isn’t as salty as salt water, but it is saltier than fresh water.)

They can be found all over the United States, although they typically do not live further north than New York or further southwest than New Mexico.

These fish eat phytoplankton, zooplankton and insect larvae, which means they can have an impact on other planktivorous fish in the system. (The main difference between these two types of plankton is that “phyto” are plants and “zoo” are animals. Both are tiny, and zooplankton can actually eat phytoplankton.) They filter food from the water with the bony extensions on their gills.

The gizzard shad has been used and/or introduced for some time as a food source for game fish. In some instances successfully – in others, not so much… certain areas consider the gizzard shad to be invasive.

Features & Behavior of the Gizzard Shad

The gizzard shad lives an average of 4 to 6 years. Often they are found in large “pods” underwater – clouds of baitfish – but they can reach a maximum size of around 20 inches and four pounds. 2 to 8 inch fish are far more common, and they reach maturity between 2 to 3 years of age. An 8 inch shad is around 3 years in age, while a 15 inch fish would be around 10 years old. Gizzard shad have a dark spot present on each side of their body near the gill cover, and they possess a long anal fin. On the dorsal fin the last ray is very long and thin, and said dorsal fin starts before the insertion of the pelvic fins.

Gizzard shad have no teeth. Their mouth is made up of a short, wide upper jaw with a deep notch along the vertical margin, and a smaller, relatively weak lower jaw.

In terms of coloring, the body typically changes from a silver-green or a silver-blue up top to a bright silver on the belly. This counter shading is a common attribute amongst many species of fish. Some gizzard shad have dark stripes present on the upper back and sides as well.

As their name suggests, Gizzard Shad possess a gizzard – a sack filled with rocks or sand that aids the animal in the breakdown of consumed foods. They feed primarily during the day, although at times some nighttime activity has been reported.

Gizzard shad can be found in the deep, open waters of rivers, lakes and reservoirs. They often travel in schools – from small clouds of a few hundred to mega-schools of what appears to be hundreds of thousands of fish. You may see them leap from the water and flip about on the surface, or pick them up on your graph. If you are looking underwater using sonar, at times the shad can be so thick that they “block out” the bottom. Your graph may show a large red mass and show the depth is only 10 feet when you’re floating over 75 feet in a deep reservoir.

If you find a mega-school, fish it. Chances are these larger, more dense balls of shad have predator fish nearby.

Spawning will usually occur some time between April and May. Females may deposit some 50,000 eggs scattered across the bottom in shallow water. These eggs are sticky and attach to the first thing they touch. Eggs will typically hatch in approximately 4 days.

Range & Habitat of the Gizzard Shad

Gizzard shad typically live in lakes and reservoirs, although they can also live in rivers & streams or brackish waters. In certain lake systems, they can make up 80% of the fish biomass. Shallow lakes with muddy bottoms seem to be preferred, which may have to do with their breeding preferences – but it may also have to do with the fact that they have lower survival rates in clear waters and waters with high vegetative cover.

They were also not seen in any of the Great Lakes until the late 1800s and early 1900s, although some believe they are native to Lake Erie.

Final Thoughts on the Gizzard Shad

Gizzard Shad are often the most abundant fish in terms of biomass within a body of water. They reproduce quickly, and while they are often a primary food source for preyfish like walleye, smallmouth bass, largemouth bass, spotted bass – even “less desirables” like freshwater drum – they can quickly grow beyond the edible size of many predators. In these instances, Gizzard Shad may actually be considered invasive, even if they had been intentionally introduced into a system to limit the consumption of other panfish, like bluegill and crappie.

This is another example of how important proper, educated, intentional water management is to the local fishermen.

Ever caught a CRAPPIE this way?? Shhh… don’t tell your buddies…