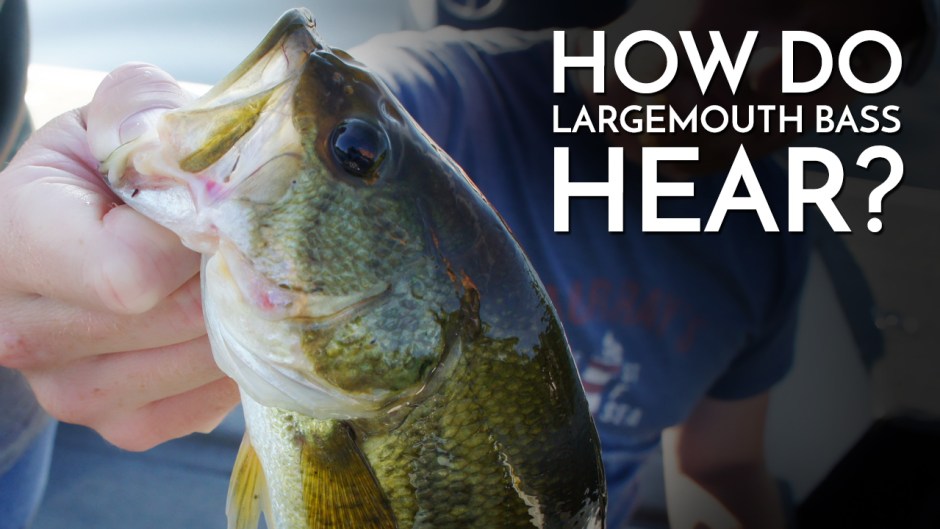 How well does the largemouth bass hear sound or feel vibrations?

Remember that we mentioned largemouth bass have the same 5 senses that we humans do – plus another – their lateral line sensitivity. Therefore when we discuss “hearing”, we need to distinguish “hearing” that comes through the ears, and “lateral-line perception”, that is felt.

Notice there is an overlap.

The lateral line can actually sense the tiny movement of a minnow’s tail, or the gentle kick of a frog. Silent lures like jigs, plastic worms and stickbaits produce vibrations that bass easily hear and feel. A softbait worked slowly can be extremely attractive to bass at times, because it closely mimics the sound and feel of distressed prey.

Yet as important as hearing and lateral line sensitivity are, they remain secondary to vision. Tank tests have been performed where blindfolded bass caught minnows, however they fed much less accurately and efficiently than those able to combine hearing and vision.

The combination of sensory input is what allows bass to feed most effectively.

So the million dollar questions is pretty obvious… what vibration pattern is most attractive to bass?

If you figure that out… please let me know before you buy your own private island!

Much remains to be learned about the sound patterns that are attractive to bass, and chances are bass that are in a certain area with a certain kind of prey are going to be tuned in to vibrations that may be slightly different than bass living in a different body of water. We mentioned that bass are experimental feeders, so they don’t usually get hyper-focused on a specific kind of prey like trout – but it would be well worth your time to experiment with different kinds of lures at different times of the year on different bodies of water to see if you can identify any presentations that clearly outperform everything else in your tacklebox.

Research hasn’t identified a wave frequency that automatically attracts bass, however most would agree that irregular sounds produced by stop-and-go retrieves and bumping into cover make lures more appealing. Again, attractive sound patterns may vary depending on the prey bass are currently keying in on. It is possible that scientific research into sound, applied to lure design, could produce large dividends in the future.

Certain sounds are definitely associated with danger. Most sound above water bounces off of the surface, so it is possible that ordinary conversation won’t spook bass. However, scuba divers have reported bass being spooked by electric trolling motors as they are turned on and off. These same divers have also observed that anglers standing in a boat to cast – which causes waves as the boat twists in the water – will also spook bass.

Personally, while fishing from shore I have noticed many times my footsteps will create vibrations that alert bass to my presence long before I’m right next to where they are located. How do I know this? Because I see them jet out from the shallows, their long dark bodies visible right in front of the wake them make… it’s painful to watch, but it’s a learning experience. While bass can see us on shore, clomping along carrying a backpack, camera and several poles is no way to sneak up on them. Tread lightly.

Bass are also extremely sensitive to obvious noises like oars banging on the side of an aluminum boat, or objects (anything from a jighead to a full tacklebox) dropping into the bottom of the vessel. However, in lakes where they are allowed, outboard motors running continuously are a part of the usual world for many bass. They seem to be mostly bothered by close, erratic, unfamiliar sounds… but I still wouldn’t motor right on top of them if it could be avoided.

Bass in cover also tend to be more secure – but no matter what, anything you can do to keep a low profile and stay quiet is going to help you get closer to (and therefore, catch) more bass.