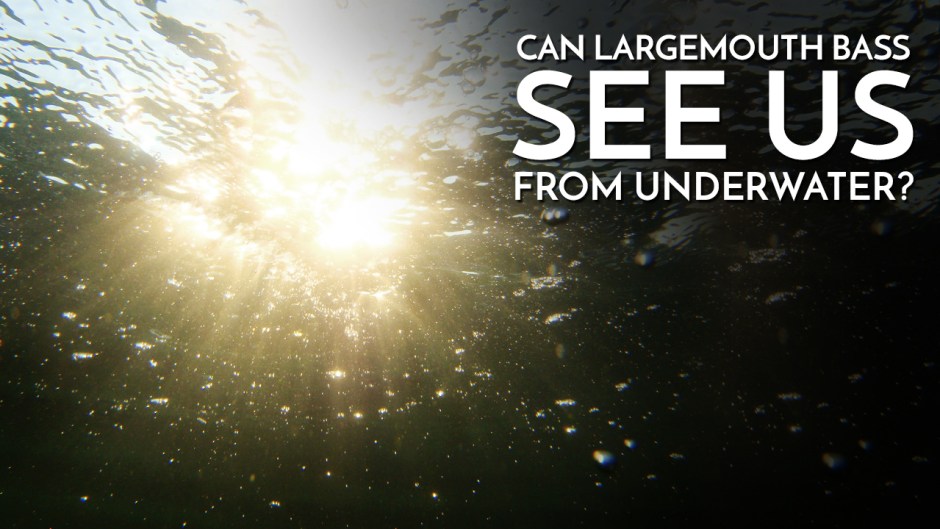 In the last article, we discussed the sense of sight for largemouth bass – arguably their most important sense for both hunting and ambushing prey, and avoiding danger.

Bass can see on both sides of their body, thanks to the positioning of their eyes. Blind zones exist to the rear, and underneath their bellies. Bass also have binocular vision in front of them, in a forward and slightly upwards direction. Prey (or lures) that enter this “binocular aiming area” are most effectively targeted and attacked.

Prey or lures in the other detection zones may also be accurately attacked if the bass has time to turn and focus in the binocular zone. Objects in the “dead zones” may go undetected – or be ignored.

Bass learn early on to fear attacks from the rear. This is why they will often back into cover. To protect themselves.

We also know that active bass can both see and target lures before they hit the water. This means they can obviously see objects outside of their domain… and that includes us, it includes boats, it includes any and all movement.

In calm water, bass have an especially good view of surface objects. If the water becomes choppy (think windy days) it blurs and reduces what can be seen above the water. This is just one of the reasons anglers will say “the wind is my friend” – it’s an added layer of camouflage, and it makes lures like spinnerbaits even more productive.

The following illustration shows what a bass can see in an upwards direction when the water is perfectly calm:

They can see us.

Whether you are walking the shoreline or fishing from a boat, it is in your best interest to wear neutral colors, keep a low profile, and tread lightly. If you’re spotted the bass could get lockjaw or worse – slowly leave the area entirely.

Talk about torture… I’ve watched many quality fish slowly saunter off after they have spotted me or felt the vibrations from my footsteps.