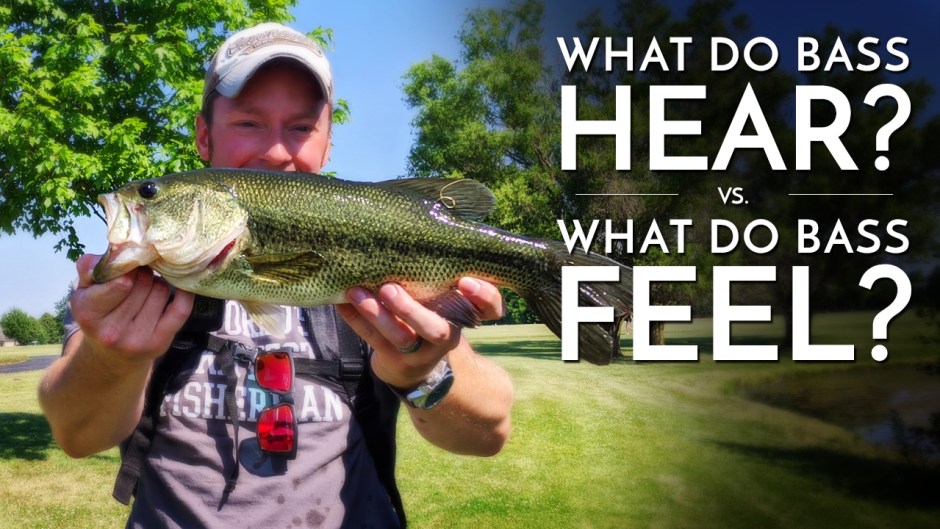 We’ve discussed the fact that largemouth bass have the same 5 primary senses that we do – but they also have another: their lateral line sensitivity. This is the sense that allows largemouth bass (and other fish) to feel prey and predators within the water around them.

We just discussed some of the nuances of this unique sensory feature in the last article: How Do Largemouth Bass Hear?

When Sound Becomes Vibration for Fish

Some vibrations can only be felt with the lateral line. These vibrations are typically lower in pitch, or frequencies within the 1 to 200 cycles per second [Hz] range (approximately – the specific range is dependent on the gamefish in question).

Other vibrations can only be heard with the inner ear. These vibrations are higher pitches somewhere between the 100-600 and 3,000-13,000 Hz range. Different fish species will hear a different section within this range.

There is also an area of overlap where a fish can both hear and feel vibrations. This is typically somewhere between 50 and 200 Hz.

Let’s Consider How a Lipless Crankbait is Perceived

Let’s take a look at a lipless crankbait like the classic Rat-L-Trap by Bill Lewis.

As this bait moves towards a fish, the higher-frequency sound waves produced by the rattling shot (BBs) and the tinkling of the treble hooks against the body reach the ears of the fish at about 50 feet, while the low-frequency vibrations from the crankbait’s wobble reach the lateral line.

Something is out there.

It’s probably not important. Probably insignificant. Given the myriad of other sounds and vibrations reaching the ears of the fish, it’s probably nothing. The fish is actually not able to clearly distinguish and identify the vibration and sound at this long range because of other sounds and vibrations traveling through the water all around. Think of this as “interference”, or a garbled radio station that you can’t get to come in clearly.

Then it gets closer.

Suddenly the vibrations of the lure start to stand out from the drone of subtle noise that surrounds the fish. Maybe somewhere between 15 and 25 feet. Then, depending on the proximity of the lure and the activity level of the fish, you may very well gain their interest…

Using vision and a combination of hearing and feeling, the fish tries to localize where this thing is at. The closer it comes, the more distinguishable it is.

Remember too that even subtle lures like stickbaits and soft plastics send out sound and vibration. The most important sense for a feeding bass is vision, but they will hear the plop of a soft bait hit the water, and feel the subtle wiggle as it sinks to the bottom.

Several senses (usually) come into play whenever a bass decides to eat.

With the right combination of “that looks like food”, flash & vibration, along with proper placement (meaning the lure passes within the strike zone of this particular fish), there is a good chance the fish will strike.

Now go get some.