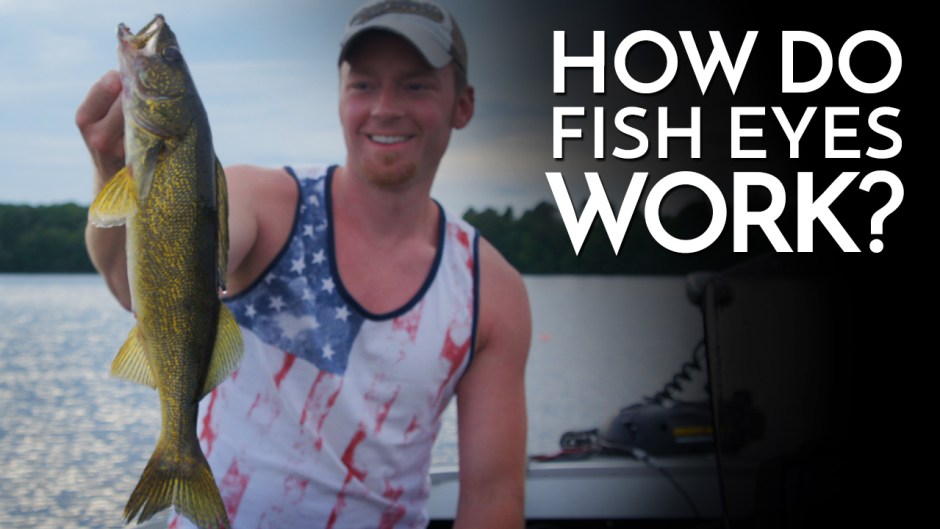 Much has been learned about how the eyes of fish function. That said, the following information is a combination of science and speculation. Within each species of fish there are a certain number of color-sensitive cells (cones), and scientists make assumptions based on their relative sensitivity.

Goldfish and minnows have 4 sets of color vision cells (cones) that have peak sensitivities to orange, yellow-green, blue and ultraviolet (UV) light. The output of these sets seem to be evenly matched, which means that goldfish see blue and UV light as brightly as yellow and orange light. Goldfish, minnows and similar species have adapted to clear water where UV and blue light are commonplace.

Walleye and sauger lack blue cones and sense the entire spectrum using only orange and green cones. They’re adapted to murky river water, which absorbs most of the blue and green light, but reflects and scatters primarily red, orange and yellow light. The UV sensitivity of walleye hasn’t been thoroughly checked, but murky water also rapidly absorbs UV light. So… it seems unlikely that walleye see UV light…

About 90% of the walleye’s cones sense the red-orange-yellow portion of the spectrum. The other set senses yellow-green, blue and violet. As a result, scientists presume that walleyes see red-orange, orange, and yellow-orange as bright colors. Green is an intermediate color, but blue and violet are weak and likely appear dark and nearly black.

Black bass and sunfish have cones that seem similar to those of walleye, however, they lack the reflective eyes and super-sensitive night vision cells (rods). Tests on the vision of bass have indicated they discriminate poorly between yellows and grays, and there seems to be some preference for reddish colors.

This suggests that bass – like walleyes – have only two sets of cones.

Bass however may not depend as heavily on the red end of the spectrum as walleye, and their UV abilities haven’t been described.

So, as we said in our previous post – What Colors Can Largemouth Bass See? – experiment. Test things for yourself, on your body of water. Over time more science will become available, but what really matters is what the fish will bite.

The only way to figure that out is to get a presentation in front of ’em.