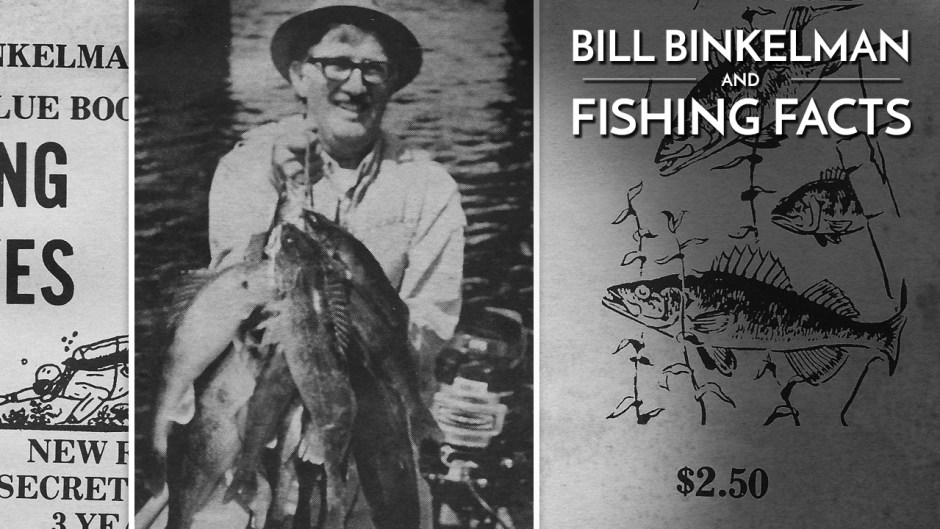 If you’re looking to have some fun, take a peek at all the ways people used to market their goods and services. For example, the top of this book by Ron & Al Lindner:

Sounds too good to be true – I think I’ll get that!

One thing that many people don’t realize is that the Lindner brothers – while excellent fishermen – were also excellent marketers. Both men are engaging, they’re storytellers. You watch their fishing segments on TV and you feel drawn in, like you’re on a boat listening to an old friend.

Over the years, these two worked with many other anglers as they built the empire that would become In-Fisherman, and one of those anglers was Bill Binkelman. These 3 men made many important discoveries and contributions to the world of bass fishing.

Binkelman was an avid bass angler, although he was more widely recognized as an expert in walleye. In 1964 he was managing a large hardware store in Milwaukee. He became enamored with the advice of Buck Perry – advice that matched his own experiences on the water.

Thus, Binkelman briefly became a spoonplugger – after all, he had to stock cases and cases of the lures to meet the demands of his customers. He even promoted them through a newsletter published by his store, called “Fishing News“. Suddenly there were all sorts of “fishing secrets” being discovered!

However, Bill abandoned spoonplugs after concluding he hated motor trolling. He favored livebait presentations – and like Perry, also promoted structure fishing, combining the two methods into his own technique. He garnered fame through his walleye fishing, but Binkelman himself admitted he learned all of his walleye techniques catching bass.

In the early 1960s, Bill met Al and Ron at the store. He said that the two Chicagoland anglers were both “already skilled fishermen, especially with a plastic worm”, and the three men remained friends until Bill’s passing in 1989.

When Bill left the hardware store, he started “Fishing Facts” magazine. His friends Al & Ron were frequent contributors to the publication, and it became the first magazine to deal seriously with the concept of structure fishing.

Over time the magazine grew to be extremely influential, and through marketing and some fancy new illustrations (like underwater side-views and contour maps), it generated excitement and a hunger for new information and new techniques.

Buck Perry was said to be a loner. Jason Lucas – a loner. But Binkelman left a legacy as a collaborator. In time he worked on television shows, magazines, and additional fishing concepts like the calendar of seasons – although many would argue the adaptation of the spoonplugging technique to livebait was his greatest contribution to the sport of fishing.

He was truly a pioneer and a world-class fishing educator.