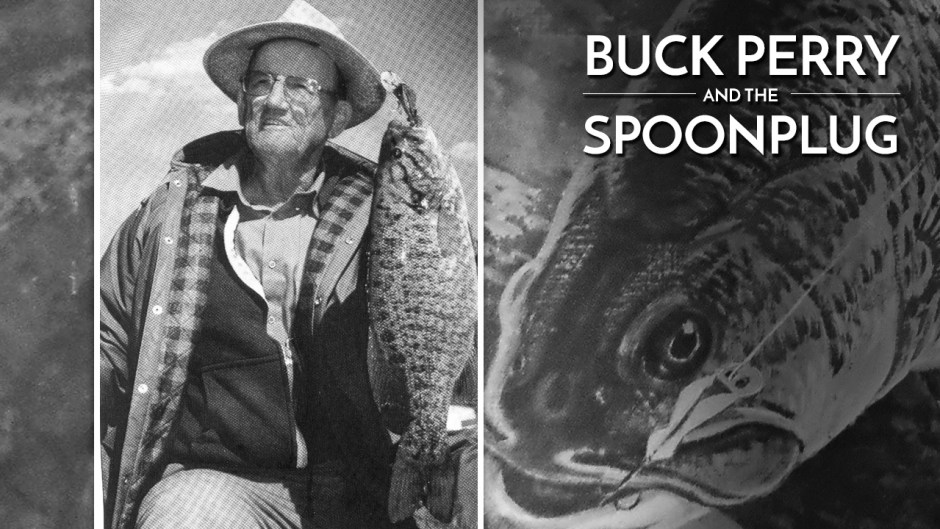 Odd little contraption if you’ve ever seen one.

A chunk of bent metal adorned with some sort of painted pattern resembling anything from a frog to a minnow.

The spoonplug was invented by Elwood “Buck” Perry after he spent time traveling and fishing in the south in the 1940s. The deep-diving lure not only served as a fish catcher – but also as a bottom-mapping device. By trolling rapidly with the spoonplug, Perry could figure out both the shape and composition of the lake bottom – and when sonar came on to the scene, he incorporated that into his system as well.

Chicago writer Tom McNally reported that Perry was catching amazing stringers of bass in the 1950s. His articles brought spoonplugging into the national spotlight, along with their creator. This method of trolling originally meant working a certain path or pattern with the spoonplugs, but later it was refined to mean fishing the bottom systematically to eliminate unproductive water.

“Deep water is the home of the bass”, Perry proclaimed.

This startled many bass anglers who had become accustomed to “beating the banks” and fishing visual cover. However, Perry’s claims were backed with alarming catches, and this persuaded many fishermen to begin focusing on offshore structure. His unique approach led to many arguments about who was the better fisherman: Buck Perry or Jason Lucas, but one thing is for sure – Perry had made a name for himself as the father of structure fishing, being the first fishing authority to give it focused attention.

Some of Buck’s theories seemed dogmatic in nature, others scientific. He talked about the shape of the bottom and it’s potential to hold fish. He said that bass live in schools. He turned attention to deeper water, and while a handful of anglers had proven him wrong on a few different points, his claims were always thought-provoking. They spurred growth. Growth that led to the development of the first logical theory for locating and catching fish.

Perry was a productive thinker.

Truer words have never been spoken. The spoonplug is still in production to this day, although it’s popularity has faded in time (being replaced by more modern trolling baits). Yet the principles and concepts that Buck brought to the table continue to form a strong foundation upon which anglers can identify the right water – with the right fish – at the right time.