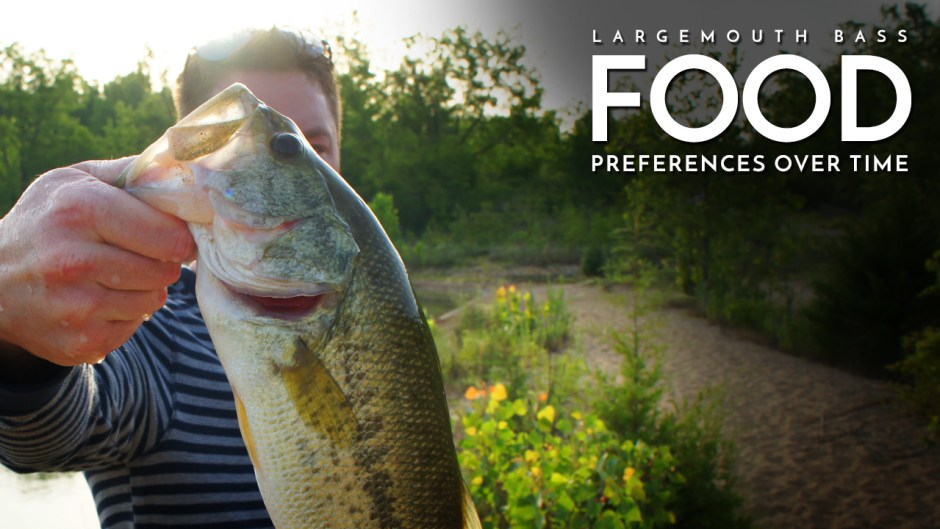 Bass are hatched – not born.

When largemouth hatch, they are nourished by a yolk sac for several days while their tiny little mouths continue to develop.

Then, after this brief period, largemouth bass “fry” depend on zooplankton and tiny crustaceans.

When they get slightly larger, they switch to insects and small fish, including each other.

While bass eat many things, they are generally piscivorous (fish eaters).

They will often select soft-rayed minnows if they are available, but they will also eat sunfish, spiny channel catfish and bullheads – or again, smaller bass.

To imitate minnows, look to something like the Strike King Tour Grade Swim Jig, and try a subtle trailer like a Zoom Fat Albert Grub. This combo mimics the small frantic tail vibrations of a fleeing baitfish:

Shad are a major food source for bass in many reservoirs, although shad are an atypical food as bass don’t usually chase food in open water where shad often school. That said, shad are so abundant and nutritious that bass have adapted to feeding on them.

To mimic a shad around cover, try a spinnerbait. If the water is murky, check out something like the Booyah Colorado Blade Spinnerbait:

Crayfish are also an important food source for largemouth bass. We discussed earlier that largemouth bass are better suited for feeding up – but they will definitely strike at food(s) on the bottom. The pincer-like jaws of a smallmouth bass are better suited for snatching meals off the bottom and out of rocky crevices , though. If crayfish are abundant, bass will feed on them primarily. Crayfish migrate to the shallows in the spring, then move steadily deeper throughout the warm months – but rarely below the thermocline.

Jig and Craw Trailer combos come in all sorts of shapes & sizes. A few of my favorites include the Strike King Hack Attack paired with a Strike King Rage Tail Craw:

Frogs are usually associated with largemouth bass, but they aren’t really a major food item until the fall, when frogs make their annual run from the shallow marshy areas and meadows to deeper water where they will hibernate. Bass can sense the increased activity, and they move to intercept.

My favorite is a Sebile Pivot Frog – they are great baits:

Salamanders and large insects are also important food sources in some water.

Overall, when it comes to selecting a bait, start off the water. Do some research on the area you’re fishing to find out what food is available, then match the hatch and work on improving your offerings from there. It won’t always be the best option, but it will give you a good place to start.

If we understand what bass EAT, we can better select our BAITS, which means we have the best possible chance of catching more FISH!

Get out there and get after it.