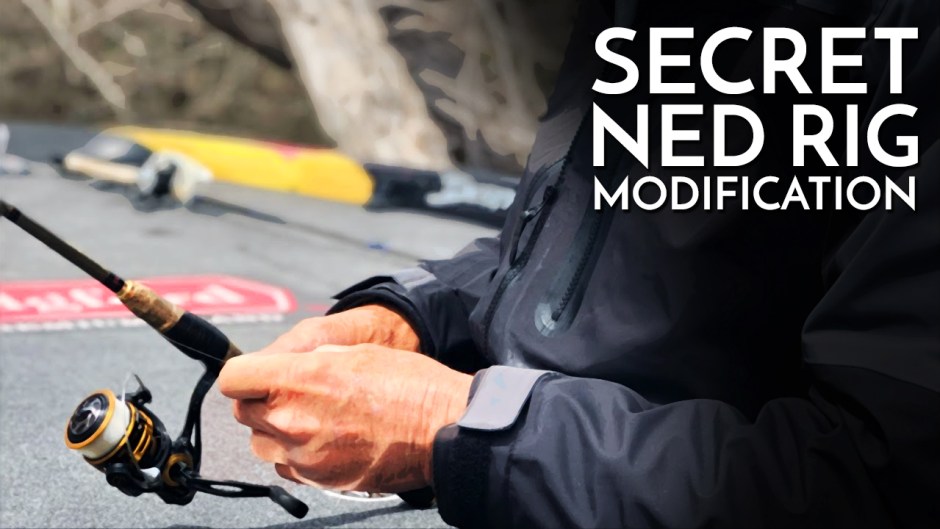 Today we’re going to go over a secret Ned Rig modification that I came across while puttering about on YouTube. The modification video was posted by Randy Blaukat, and his channel is simply called: Intuitive Angling With Randy Blaukat

Please make sure to give him a follow! I’ve enjoyed several of his videos since this one was suggested in my feed, and (if he gives me his approval) I’ll be sharing a handful of his helpful videos – and testing his techniques very soon!

He starts off by saying that Z-Man products are not his favorite. I believe he is using a Z-Man Ned Jig in this video based on the light wire hook and the shape of the jighead, but the plastics he picks are where the magic happens.

The heavy salt in the Zlinky is key. By cutting the tail of the bait down to about 2 to 2.5 inches, Randy is able to rub the bait between his fingers and rough it up, bringing salt to the surface and creating a less shiny appearance.

Many anglers have told me that plastics can work better after they catch a few fish and start to get ripped up; they believe this is because it brings more salt & scent to the surface of the bait. This would be right in line with the modification.

Then, the tail is cut straight up to the hook with scissors, and the collar of the bait, near the jighead is trimmed flush. This gives the bait a unique look, and it also allows even more surface area to come into contact with the water and the mouth of the fish.

Finally, chartreuse or orange dye may be added to the tip of the tail, depending on the conditions. Check out Spike–It Dip-N-Glo for starters, to add scent and color.

It’s amazing how such a small bait can be so effective. It’s also amazing just how many modifications there are for such a tiny delivery system. While Z-Man is famous for marketing the Ned Rig name, adding some sort of small jigworm to your arsenal will definitely help you land more bass – especially under tough conditions.

Pick the jig & plastic that look good to you – and get fishing.