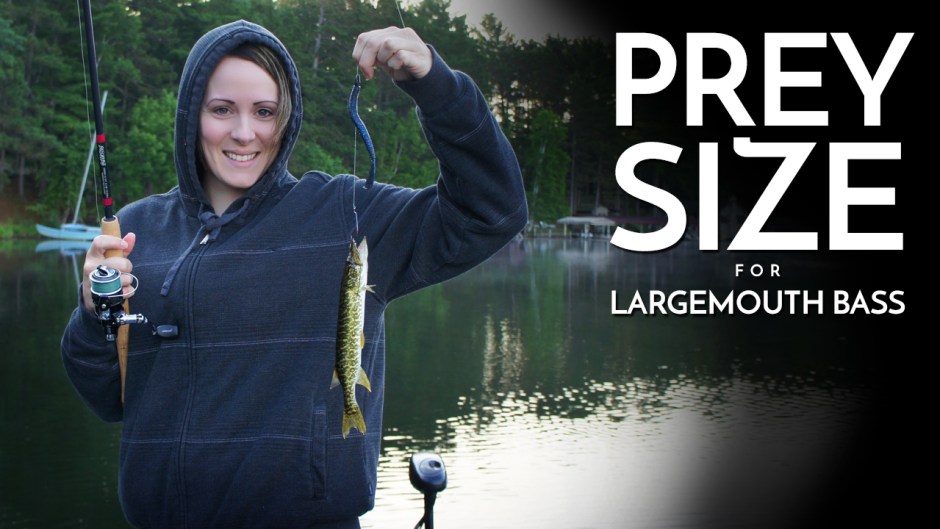 The size of an individual largemouth bass will determine prey size – the upper and lower limits of what they will hunt and ambush – of what it can and will eat. At times, largemouth bass will attempt to eat prey almost as large as themselves. In other situations, bass will have to settle for larger forms of tiny animal plankton when larger prey isn’t available.

Some food is really big.

Some food is really small.

In fact, the second largest bass that I ever caught here in Illinois came on a tiny little Strike King Mr. Crappie Lightning Shad. I was looking for panfish and this behemoth came out of shallow cover and absolutely smoked this tiny little jig.

I love fishing – you never know what you’re going to catch.

The Lower Limit of Largemouth Prey

The lower limit of largemouth prey is set by several factors. First, the prey needs to be large enough to be seen, and also large enough that it’s worth chasing. Bass are not stupid, and they will rarely waste more energy chasing a meal than what they will get in return if they catch it.

The space between the rakers gets larger as bass grow. So larger bass require larger food – for more than one reason.

The Upper Limit of Largemouth Prey

The upper limit is determined by the gape of the mouth and throat, and the ability of the bass to catch and hold strong and struggling prey. Crayfish may at times be too tough and painful to eat, even though they can easily fit into the mouth of a bass. Large gizzard shad can be strong and swift enough to escape unless they are taken head-first. Catfish and bullhead are spiny and will fight hard to escape.

That means these difficult preyfish may be low percentage targets.

Maximum length of the prey also varies with shape (body type) and other features, like spiny fins. Bass will take longer thin preyfish in longer sizes than thicker sunfish. Studies show that bass will occasionally eat fish that are as much as 60% their own body length.

Stomach samples show however, that bass usually opt for food anywhere from 10% to 50% of their own length. Twenty percent to forty five percent being the most common range.

Preyfish this size are the best balance between energy required to capture, and the energy gained from eating.

Every prey species has special abilities and tactics that they can use to avoid being eaten. The dash speed of fish increases with size. Bass need a proportional size advantage to run down prey. However, if the target looks sick or injured, bass will pounce and not hesitate attacking larger-than-average prey.

Keep this in mind when you are selecting your next presentation, and try to match the size of your bait with both the local forage, and the size of the bass you are targeting.