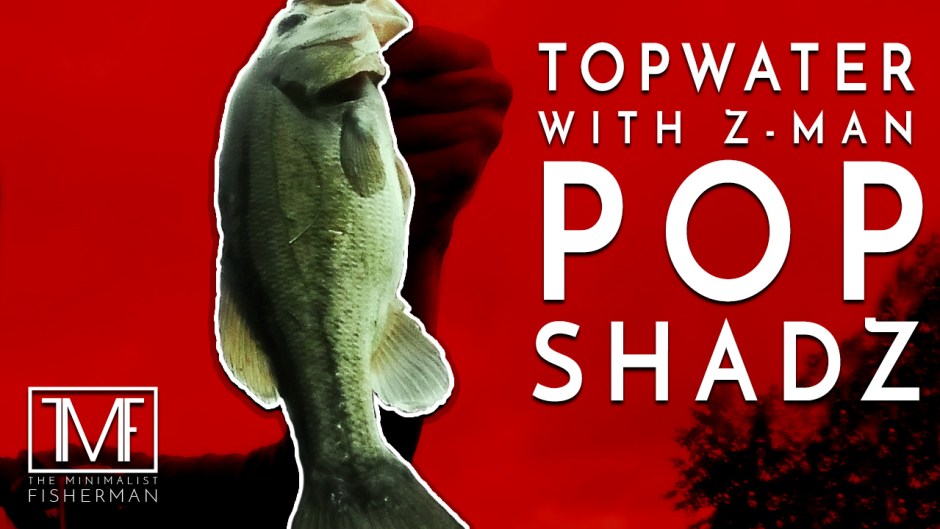 After my second trip to the pond in Illinois, I started to find myself more and more anxious to get back out. In years past, there were many days that I didn’t even roll out of bed. I felt like I had too much to do, or like the world would fall apart if I didn’t go straight to the office. It was hard to get up and go super early – and just like we’ve talked about in the last 2 videos, I certainly didn’t make it any easier on myself with the goals I was setting.

I was frustrating myself because my “plan” was always too complicated, and my lack of skill in key presentations did not help my confidence. These combined made it hard to pull myself out of bed at 4:30 a.m. in the midst of running a business and “fixing my life”… as it was unraveling…

I’m not going to rehash all of that now, but take a peek at where I was at not long before this October day, when I went out to try fishing a Z-Man Pop Shad (or again, in the plural sense – Z-Man Pop ShadZzzzzzzzzzzzzzzzz).

This was another bait that I had “collected”, then held on to for many years. I mean, literally 4 or 5 before I found myself in a situation where I wanted to try this bait. I could just never bring myself to throw it away, but when I did finally try it out my mindset was “use it, or toss it”.

We know that collecting is not a behavior that a minimalist fisherman should engage in, and I decided to try this bait out instead of tossing it.

I am glad I did – because it’s a really fun bait to throw.

When I sat down to write this article, I discovered something else I had completely forgotten. This trip in early October was actually my fourth trip to the pond – not my third. I would have completely lost track of this trip had I not been keeping a journal.

Keeping a journal is so important in general, but also for fishing, or for business, or any other topic you want to record and look back upon and learn from, or see how far you’ve come. Decide to make this something you begin to practice now.

This is another topic we are going to cover more in depth, but I can’t stress this enough – it is so important to have a record, and data to look back upon – for so many reasons.

The Third Day at the Pond

September 26th Pond Fishing in Illinois
“Weather: around 51 degrees when I left the house at 6:45. Skies were clear, weather has been stable for a few days – lots of rain about 4 days ago. Threw a topwater for 2 hours. Started in the spot I caught the fish last time with a black and silver Zman Pop Shad which is a floating bait with a cupped mouth about 4 inches. Nothing, so I switched to a toad and tried casting and retrieving. When I got to the back muck pond opposite the parking lot a good bass missed the toad as I worked it like a frog over the muck. I threw it right back and someone grabbed it after 3 more casts, just enough to move it, but not hang on. I switched to a Sebile Pivot Frog (orange, only color I had) that has a single hook in it. This was also the reason that I started with the Pop Shad, because it had the one large hook in it and last time I missed that fish with the standard frog hook. Anyway, worked the area for like 30 minutes or so and nothing. I did see another fish blow up across the pond off to the side of the “dock” looking platform. When I went back over there, I noticed that I could see under some of the mats. There was space, there was dark clear water where things could roam. This is something that I will need to be mindful of moving forward, where there is or is not space. It’s misleading though, because this is the second outing where I’ve missed fish in that shallow back muck pond area. Next time I’ll start and end there. Worth going back. I’ve got a nice little habit going here with the changes to my work schedule, I really hope I can keep this up – it’s a lot of fun.”

What We Learned on Day 3

So when I went this time, I started with the Pop Shad because I was able to rig it up with a single, weedless hook. That cupped mouth still picked up the muck, but it worked ok.

I ended the day on the Sebile because I wanted something that wouldn’t get tossed up in the air as easily on a topwater strike through the muck.

Ultimately, I caught no fish – and to be honest, I don’t know if I took my camera this day or not – if I did I… deleted the footage. So let’s just assume that I wasn’t bothering to tape anything yet. 😉

Look at these notes though. Clearly, we learned a few things, so it was not a wasted trip!

The Fourth Day at the Pond

October 2nd Pond Fishing in Illinois
“Weather: around 74 degrees when I left at 6:30. Been strangely warm the last few days, and we’ve had 2 days of sun. It was overcast this morning and spitting a bit. We’ve had a lot of rain in the last week. I think it has been windy lately, and you can see that a lot of the muck that was sitting up on top has been reduced – at least it seemed that way. Could this be because the water was actually up a bit from all the rain? I’m not sure – it’s just a big pond so I don’t know how the water changes yet. Larger pad looking weeds on the edges of the pond are turning brown and starting to die off. I fished for about 2.5 hours this morning, just using a topwater. I took that Z-man Pop Shad and cut the front cup off of it so it would come over the muck better. It did, and I also caught a fish (maybe 1lb) off of it that picked it up right as it hit the water and went slightly under. This was by where I caught the fish 2 trips ago, down towards the bridge. I also missed yet ANOTHER fish in that back muck pocket. Well, I’m either missing them or just scaring them, and they’re either bass or something else… I felt like I could slow down and try a light worm or fluke but I never switched. This is difficult fishing for sure but I’m trying to get my confidence up with a topwater and learn more about fishing this crap which is all throughout Illinois. Remember it was just 18 days or so ago that you took the kiddo here for the first time, and you had no idea what to do or what could work. So this is really neat to see. Finally, I am not sure if the modified Pop Shad is worth using again. It slips a lot, and I feel like that pivot frog would give me a more muck-free experience… keep experimenting.”

What We Learned on Day 4

The fish I caught attacked my bait almost instantly as you can see in the footage. So this brings up another point…

I left the pond this day thinking that I could have tied on a literal stick with a hook in it, and the bass would have smacked it because the strike was so instantaneous – I mean I must have landed this thing right on his head… did he really get a good look at it before he ate it?

These are the questions that keep me up at night. 😒

Fortunately on follow up trips I was able to confirm that yes, this little dude looks good to the bass, so it was no accident – but as far as I knew this day… it was just a random thing that I couldn’t reproduce.

Still… I had another fish!

Pop ShadZ do work, and I have caught many more fish with them since this trip. They will remain a staple in my repertoire this coming season – unless I come across something better and replace them.

Remember, as minimalist fishermen our goal is to cultivate a super-effective family of baits that we personally have confidence in. This will save money, make us more effective and have the added benefit of making it easier to just get up and go!

So What Can You Take From This and Apply to Your Own Fishing?

No matter what happens – be grateful. You get to go fish. Others can’t… because of physical limitations, prior obligations, or some other reason.

Now get out and do some more exploring on your body of water! Grab a few Pop ShadZ a give ’em a try, and if this has helped you in any way, make sure to tag me on social media and let me know – I’d love to hear from you.