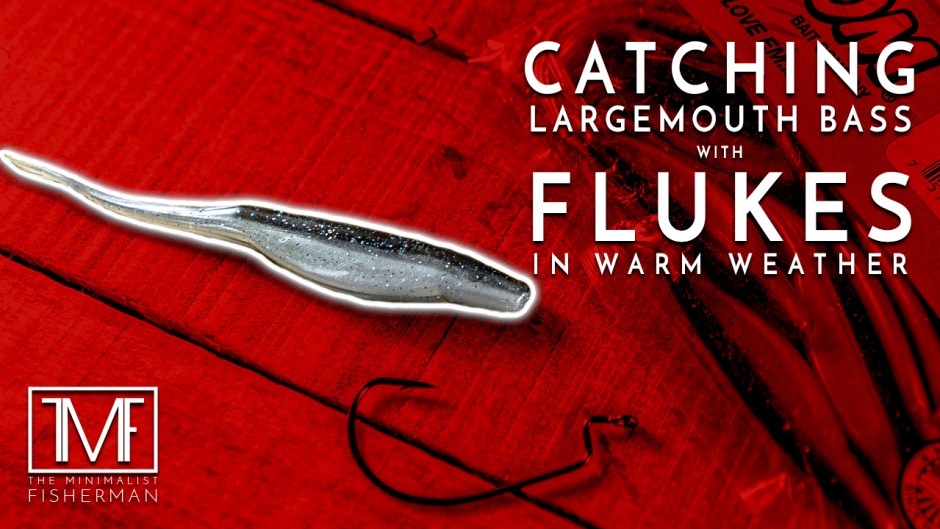 Have you fished with a fluke before?

I’ve talked to many anglers, and it seems to me people either love ’em or hate ’em. They’re hot or cold on the subject. Some guys will go with a worm 100% of the time, or a Senko – but personally, I love to throw a fluke – and I’ve caught a ton of quality largemouth bass on them.

When possible, I’ll rig them up weightless. A lot of times I like to use a slightly larger, thicker EWG hook and heavier fluorocarbon line (10lb test) on a stout spinning rod & reel combo so that I can slightly increase my rate of fall without adding additional weight.

In terms of movement speed – I usually keep it pretty slow, but not always. One of the great things they bring to the table is a compact design that seems to get hung up less around weeds and timber. I’ll throw them in places that you would traditionally throw a wacky worm or a stickbait, and even toss them out in thick muck and bring them across the top. There are also times to speed up and work them with a series of quick jerks followed by a pause.

Some people will even take this a step further, rigging up two flukes in tandem (one in front of the other) and jerk that presentation along so it looks like one fish is chasing another.

As with most soft plastics, this could also work on a Carolina rig, drop shot rig, as a jig or spinnerbait trailer, or pretty much any other application where to need a slender, sinking baitfish profile.

That said, my favorite way to fish them is weightless, and as you’ll see in the video they catch fish both small and large.

A Bit More About Flukes

Flukes are known fish catchers, and they attract multiple species in both salt water and fresh water. Because of my location, I prefer using them for largemouth bass. They have a natural fish shape – or profile – and even though they don’t have a ton of detail, they look like an easy meal and get SMACKED. (This again raises the question regarding what the fish can actually see – can they see the little details on baits? We will continue to discuss this as we go.)

Rigged weightless, you can make the bait glide and dart through the water column with a simple flick of the rod, but don’t work it too fast. If you are in a situation where you are trying to imitate an injured baitfish, consider how slow that baitfish might be moving – and impart that action into your presentation.

One other benefit to this weightless bait and terminal tackle setup is the fact that it is harder to “fling” once a fish is hooked, since there is no weight getting whipped around as a fish thrashes their head.

I have tried many other flukes in the past, and I always come back to the Zoom Super Fluke – it works. It lasts. You’ll usually catch several fish on a single bait. This year I am also going to take some time to test the BioBait 5″ Switchback Shad, another fluke style bait that looks really, really cool.

(I know I know, I just asked whether or not the little details on baits make a difference… but… this one looks so good – I have to test it!)

Over the last 4 trips to the pond, I had been skunked twice and caught two nice bass on topwater presentations – a Z-Man Pop Shad, and a Strike King KVD Sexy Frog. Walking around the pond had allowed me to really start to understand the layout on the shore and the little inlets, bends, the feeder creek and dam. I knew where I could cast, where I could walk, and where I had seen fish.

One thing that really bothered me was the fact that I had watched a few fish swim up to – and reject multiple presentations – worms, stickbaits, Hula StickZ… why? What was the forage? What was I doing wrong here?

I wanted to give the fluke some time, and I took a topwater as well. I started with a Strike King Rage Tail Toad, black with red flake, so that I could cover more water – but I quickly found out that those cast like crap. Tons of wind resistance, probably because of the flappy legs and Rage Tail cup – not sure, but it was definitely noticeable… maybe even user error… but… well, let me share the afternoon:

The Fifth Day at the Pond

October 8th Pond Fishing in Illinois
Weather: around 72 degrees and clear skies, but it was 40 degrees this morning. I went out at 4:15 p.m. and planned to fish and tape until 6:00. There were a lot more anglers around at this time of day. Maybe 8 or 10 compared to zero in the early morning. Still the same amount of walkers and bikers. I started out with a black and red sparkle Strike King Rage Toad, which I thought would help me cover more water, but it was really not the right tool for the job. It didn’t cast all that great surprisingly, and I had to move it really fast to keep it on top. Plus, it just didn’t come over the muck like I thought it would. I switched to a frog after 15 minutes as I worked my way around the left side of the lake. This time I also took a Zoom fluke rigged weightless. Mosquitoes were terrible this evening – not sure why. Maybe they’re not active in the morning as much. I saw fish on the far left side and slowed down to throw the fluke at them. Had a follow but he didn’t bite. It was actually really bright and clear and he got a great look at the bait, I bet he would have hit a worm, but he inspected the fluke and swam off. I fished the frog a lot as I worked my way around the lake and missed yet another fish in that back bay area across from the parking lot. By this point I had about 30 minutes left and I wanted to make sure I fished the area where I had caught my 2 fish, so I headed that way. Before I went around and across the bridge I tossed the fluke out in front of a bush overhang and caught my first bass, a little beat up 1 pounder. I cast a few more times then went over the bridge and threw the fluke around and after about 5 casts caught a really nice 2.5 pound bass near the same area as my previous trips. I noticed in this shallow calm water, you can see a lot of activity if you pay attention. For example, when a fish eats on top, you can see it. When they dash after something, they create a wake or bulge on the surface, so you can cast around them. When they move under the muck either to eat or run, they create movement. Watch for this along with telltale signs of caught fish like lines and blow up holes in the muck, or piles of water grass left behind on the ground that anglers take off of the fish they catch. Really a good afternoon.

For more footage of just the actual fishing – not the analysis like we have listed above – check this video out:

What We Learned on Day 5

So Ends Trip #5 to the Pond

By the end of this afternoon trip, I had evened up the score and caught two fish on topwater, and two fish on a finesse presentation out of the pond to date. This was a good sign.

I left the pond that day thinking about the fact that I could see the larger of the two bass moving about underwater without actually laying eyes on him. We were far away from all the other fishermen on the shore, and I was able to creep up while he was preoccupied.

Such a cool experience. Another one that I am very grateful for.

Next time you go out, try a fluke on your body of water – especially if you usually fish worms and senkos – and see if the smaller baitfish profile helps you snag a few fish. Hit me up on social media if you do!