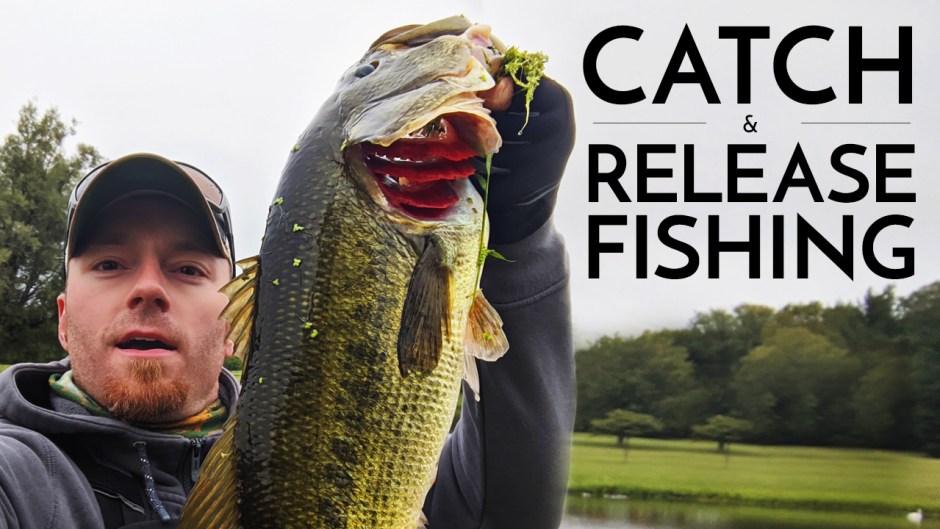 In fishing, the concept of catch & release has been widely practiced ever since the early 1900s… in Europe. In North America however, the trend towards voluntarily releasing gamefish started with a trout & salmon angler named Lee Wulff around the 1930s.

During this time, trout fishing was a top priority, and many anglers had started to realize that the increase in fishing pressure and harvest led to stocking. Lots of stocking. Loads of hatchery trout were dumped into streams, and fishermen found them to be inferior to the native brook trout.

Jason Lucas, a bass fishing pioneer was also known to grumble about “those paltry, hatchery-reared trout“, which helped shift the national focus away from trout to largemouth over his 20-year career with Sports Afield Magazine.

Wulff’s answer to the stocking issue was the separation of catching fish from killing fish.

A good gamefish is too valuable to be caught only once.

This idea ran against prevailing management customs and theories in other fisheries, but over time, started to take hold in trout-fishing circles.

In 1971, Ray Scott (the founder of B.A.S.S. – the Bass Anglers Sportsman Society) attended a trout fishing conference in Colorado. He noticed the enthusiasm that the anglers had for releasing trout. Well if releasing a 10-inch trout was a thrill… imagine releasing a 6-pound bass to be caught again and again!

The added benefit for Scott was that catch & release provided a (partial) answer to the disdain tournaments had started to garner from local anglers. Locals didn’t want “a bunch of hotshot anglers coming in and killing all of their fish!” So why not take steps to give anglers “their” fish back, and diffuse the hostile feelings towards tournament fishing at the same time?

In 1972, bass boat livewells had no aerators. Many were poorly designed. All of the sudden – that changed. (If you needed a testament to the influence of tournament fishing on the sport of angling, make a mental note of this situation.) The scheduling of B.A.S.S. tournaments also changed, opting for cooler water periods to minimize fish stress and fatalities.

So to be fair… the initial interest in catch & release had more to do with reputation, or political maneuvering, than with the actual preservation of the fish. However, in time this practice was shown to help sustain good fishing, and anglers could see the potential damage that could be done through heavy fishing pressure. Many fishermen were shocked when Georgia’s new West Point reservoir showed a serious largemouth bass depletion after only 2 years (the reservoir opened to fishing in 1976).

Thus, thoughtful anglers that were able to look to the future – either selfishly (I want to catch more fish) or otherwise (I want my grandkids to catch more fish) – began to see voluntary catch & release as an important component of long-term, quality fishing. Certain fishery managers began to push for stricter regulations, and over time the black & white mantra of catch & release transformed into the In-Fisherman concept of Selective Harvest.

Fish are delicious. They are nutritious. The good Lord put ’em here for us to enjoy – from the lake to the table. However, in order to maintain good fishing and a healthy gamefish population, we need to do our part by stepping away from certain traditions of the past – especially as tackle options and boat electronics become more and more effective.

Stringer shots of giant bass might look great – but removing 6, 8 or 12 large bass that will most definitely spawn in the spring can have a detrimental effect on your lake. When you consider that a fraction of 1% of every group of fry might survive, all of the sudden these trophy fish become even more valuable – but within the lake.

Not on the wall.

If you want to eat fish – and let’s be honest, who doesn’t – a family fish fry sounds absolutely outstanding right now – focus on species that reproduce quickly and that exist in your body of water in large numbers. Panfish like crappie, bluegill, perch or even bullhead – but remember to release the larger panfish as well.

There are trophies within every species, and monsters need to spread their genes to future generations!

Use your best judgement to define what an “eater size” fish is for your lake, and remember – you can make one heck of a feast with just a handful of fish. Don’t load the freezer every time you’re on the water.