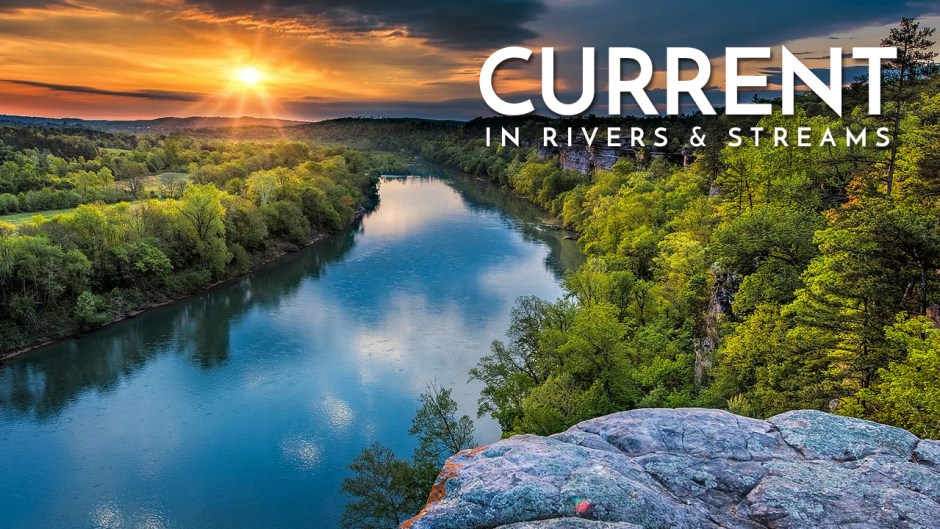 Recently, we discussed what a channel within a river or stream is and where it is located. This knowledge will help you find the deepest, fastest water without the aid of electronics. But are there other factors that come into play and impact how fast your body of water is moving?

Does the speed of the current help determine what fish are present as well?

Let’s take a look at what can increase or decrease current speed, and how fish behave in these different conditions.

A current in a river or stream is the flow of water primarily influenced by gravity as the water moves downhill. Over time, this flow can lose its potential energy. The rate of movement, speed and direction are all important factors.

Current is the force of flowing water, typically discussed in terms of “speed”. This speed is usually determined by the slope – or gradient – of the streambed, the shape of the channel, and the amount of flow.

A high-gradient stream is one that drops rapidly in elevation. One that slopes slowly would be considered low-gradient. A stream can also contain both high and low gradient areas. The gradient is typically highest near the source, and it slows as it flows along, especially as sediment is deposited (this gradually flattens the streambed, slowing current). Usually the slowest current speed can be found near the mouth, where the flowing water enters another body of water. (Note that in some cases the water flow will slow and spread before connecting with another body of water, simply soaking into the ground.)

If the flow increases, the current will generally increase as well. A narrow passage or shallow area can also increase current, because the same amount of water is forced through a smaller area.

What are pools, riffles & runs?

When the current increase, it can excavate a deep pool. In this pool, the current is much slower and the sediment carried here settles out. As the sediment builds up though, it can cause the water to get shallower – and remember when water gets shallower it causes the current to speed up because the same amount of water is forced through a smaller area – this increased current is called a riffle. Riffles are shallower, faster moving areas of a stream, and their fast water starts to dig the channel deeper, creating a run. This run is usually characterized with a more moderate current and it will continue until reaching the next pool where the process repeats.

This is what leads to the typical pool-riffle-run configuration, which is very noticeable in smaller streams, but can be harder to identify in larger bodies of water.

Pools also look calmer on top, because the sediment that settles in the slow current consists of fine materials: sand, silt or muck. In riffles and runs where the water moves faster, sediment washes away and the gravel, rocks and boulders that remain can deflect the current and produce more turbulent waters.

How does current impact fish behavior?

Fish behave differently in fast current versus slower current. For example, fish in faster water are conditioned to grab food quickly without much examination. If they didn’t the current would simply sweep their meal away! This means that fish in faster water are quicker to hit a lure when compared to those in slower water. Fish are also easier to locate as they are typically confined to slack water areas where they can avoid fast current – as opposed to being scattered all throughout an area.

The deepest, fastest water always follows the outside bends along a channel, and expert stream fishermen can quickly spot these deep zones at a glance. They also know that most stream species hang out in or alongside these areas.

If you are targeting a specific species of fish, it helps to know which fish prefer high-gradient areas, medium-gradient areas and low-gradient areas. Let’s take another peek at one of our references: The Freshwater Angler™: Fishing Rivers & Streams:

High-Gradient areas are favored by species like smallmouth bass and steelhead. The higher the gradient, the more the fish hug the bottom to escape the current. These areas typically hold the largest rocks and boulders.

Medium-Gradient areas are favored by everything from walleye to channel catfish, sauger, muskie, spotted bass, sturgeon, striped bass, wipers and shad. These areas have a more moderate current which means the fish don’t have to hug the bottom quite as tight, and there are usually fewer boulders but a good mix of rocks and gravel.

* These “speeds” are relative. There are usually no fish found in the absolute fastest water.

Next, we’ll spend a little time discussing cover and current breaks. If you need a refresher, make sure to bounce back to review what a channel is – all of this knowledge we are amassing is important as we get ready to explore new streams and rivers this coming year!

Last year we had good luck in small lakes… this year, we have our work cut out for us.

NEXT SECTION: Cover & Current Breaks [Part 1]
PREVIOUS SECTION: What is a Channel & Where is it Located?