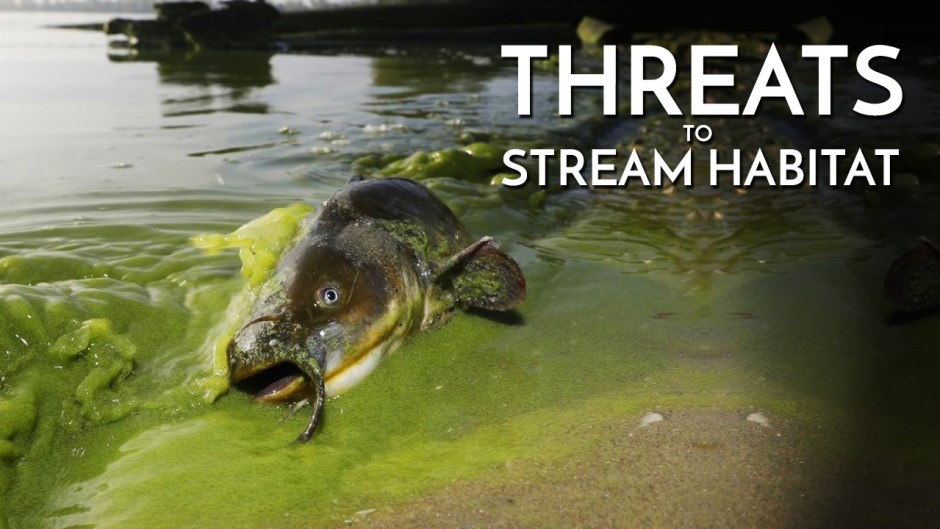 Fishermen care about the environment. The same could be said for hunters and many outdoor enthusiasts. We all appreciate and understand that we need to take care of the animals we chase and the environments in which they live. This is contrary to what many “activists” would have you believe… but it’s true. The best way to convince others that we are a source of good is to expand and share our own personal knowledge of the things that have an impact on the outdoors.

First, let’s be honest: man’s activities have destroyed a large amount of fish habitat in rivers & streams. Water that passes through cities or agricultural areas face the worst problems. We hear the most about pollution in the press, but sometimes other less startling problems can create more havoc for the fish.

One issue is bank erosion. Bank erosion is something that we are all aware of (if you’ve ever been on a large natural lake you’ve probably come across “no wake” zones), but this is also one of the most difficult problems to solve. Near streams, many farmers allow livestock to graze right to the edge of the water, which can remove the vegetation that stabilizes the bank during a flood.

If the protective vegetation is removed, the banks will actually crumble during high water, which will cause mud to cover or blanket the rock and gravel below. This change can lead to the stream holding fewer gamefish. Why? Remember when we were discussing Cover & Current Breaks [Part 1], we pointed out that small rock holds baitfish and other forage:

“… it’s natural that fish living in current would seek out anything that might prevent them from being swept away. The moment they hatch new fry are small, weak swimmers – and food for larger predators – but fortunately, they can find cover and concealment behind pebbles and gravel… to start.”

No baitfish means no gamefish, and streams with severely eroded banks typically don’t hold great populations of the latter.

Streams can be fenced off near farmland to prevent this to an extent, but sometimes that is a tall order and not fair to ask of the farmers. Not to mention this isn’t a practical solution for larger streams… and even on smaller ones fences can be damaged by flooding or the same livestock they are supposed to ward off. This means they require frequent maintenance (which again is not fair to the farmer that has more than enough work to do already).

Another threat to be mindful of is channelization, which is the straightening of stream and river channels. This is done to reduce flooding, because a straight channel can funnel off water much faster than a meandering one. However this can have a very negative impact on the fish population, and in one Missouri study tracking the channelization of the Chariton River, a section that had been channelized produced 83 percent fewer pounds of fish per acre than another section of the river that was untouched.

Channelization can also worsen flooding downstream, which harms the fish population there as well. Overall channelization reduces the total length of the stream (because there are no winding bends) and much of the cover, spawning areas and food sources are destroyed.

Dewatering is the pumping of stream or river water to irrigation systems to help maintain fertile farmland during drought years. The advantage of course is fertile farmland… the disadvantage is that it reduces already low water levels in rivers and streams. This can reduce streamflow by 90 percent or more – in some cases streams have even been pumped dry.

This change forces fish into deep holes where food may be very scarce. Slower water also heats up faster, which can stress or kill the fish.

On large rivers like the Mississippi, a minimum depth of 9 feet must be maintained to allow barge traffic to freely pass through. The U.S. Army Corps of Engineers dredges the river – which means they clean the bed of weeds, muck and rubbish using some sort of scoop or suction. This sounds good, but in reality the dredge spoil is made up of about 90 percent water, and when it is deposited on the river bank it doesn’t pile neatly – much of the spoil runs back to the river or nearby waterways.

This spoil can ruin prime areas for both fish and wildlife.

These days, there are much stricter rules and laws regarding pollution and sewage. Poorly treated municipal sewage and waste from feedlots can still be a problem though. This waster actually increases the fertility of the stream, which results in large algae blooms that consume dissolved oxygen and cause periodic fish kills.

Algae blooms are a common thing here in Illinois – especially as the weather gets warmer and warmer on the smaller lakes that we fish on a regular basis. However, the algae never gets so thick that it kills off the largemouth bass we’re hunting… who will actually use these thick mats for cover at times.

Herbicide runoff can also cause fish kills. If the chemicals are applied right before a heavy rain, they may actually wash into nearby streams or rivers. This can kill fish and invertebrate life as well.

We need to take care of our hunting & fishing areas so that we can pass down a clean, amazing earth to our children and grandchildren. However, we need to work with farmers and the Army Corps of Engineers – these people are not “the bad guys” by any means, and there are reasons that they do what they do.

By understanding the dangers to our fisheries, we can continue to work towards compromises and improvements that benefit everyone.

Next, we’ll touch on river navigation. Fun fact: it is currently -6 degrees with about 3 feet of snow piled up outside. Everything is frozen… Lord help me, I can’t wait for spring.

If you’re able to fish today – go do it right now – tight lines!