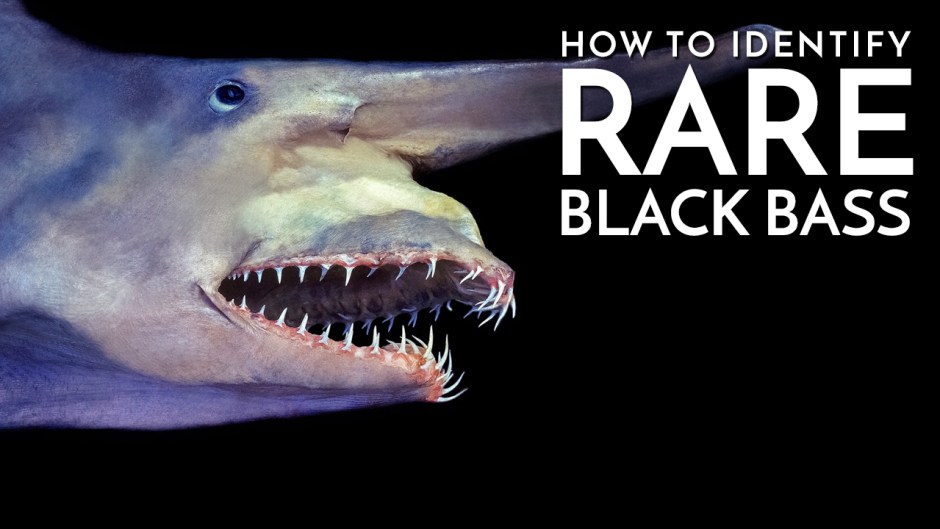 So that picture… those teeth… ugh… that’s not a bass, it’s a goblin shark. The goblin shark is a rare creature with a lineage dating back 125 million years. Some people actually refer to it as a “living fossil”… but I don’t want to catch one.

I do want to catch some of these beautiful, rare black bass though!

To this point we have covered some of the most common black bass species. However, there are a few other fish that may or may not be recognized as black bass depending on who you ask. In this article we’re going to cover a handful of these rare bass species, or sub-species, so if you’re looking for a challenge… you’ve found it.

Interestingly, several of these fish can be found in Georgia, and some people have given the state the title of “The Black Bass Capital of the World”. Hard to argue, considering the largemouth world record has also been held by this state since 1932.

(Many anglers are skeptical of this record, but it is what it is… for now…)

So let’s jump right in and start with Bartram’s bass. These fish can be found throughout northeast Georgia within the Savannah River basin from Augusta and above (western South Carolina and eastern Georgia), as well as the Chattooga, Broad, and South Forks of Broad River. These fish grow anywhere from 5 to 16 inches long and favor rip-rap shorelines. However, spotted bass prefer these areas a swell, and in certain waters the numbers of Bartram’s bass have declined as a result.

In fact, the fish (named after William Bartram, who came through the area in the late 1700s) thrived in reservoirs such as lakes Jocassee and Keowee until the mid-1980s prior to the intentional introductions of other bass species. Specifically, spotted bass, or Alabama bass.

In the past, these fish had been incorrectly labeled redeye bass, but scientists have now determined them to be a unique species all their own. (Check the usgs.gov website for the current status and range of Bartram’s bass.)

These fish can be taken on a variety of lures. Fly fishermen target Bartram’s using streamers and poppers, while anglers favoring traditional spinning gear can use small Rapala crankbaits, small worms on shakyhead jigs, or inline spinners.

While they are sought as gamefish, proper care must be taken as this unique fish only lives in this area… and therefore has an uncertain future.

The Tallapoosa Bass is another resident of Georgia. This fish grows from 5 to 16 inches long, similar to the Bartram’s bass, and not surprisingly, it can be found in the Tallapoosa River basin. These fish are not found in lakes and reservoirs, so you’ll have to explore flowing water to make contact.

Fish in the 12″ range are considered trophies.

The Tallapoosa bass likes rocks, but they can also be caught around timber and undercut banks. These areas are always good spots to check in rivers and streams no matter what you’re targeting.

The Tallapoosa is a smaller fish, so use light tackle. Small jigs, grubs, crankbaits and minnow plugs – especially crayfish imitators. The Rebel 4-Pack is a great place to start for this kind of fishing:

A truly unique specimen, the Chattahoochee bass has fiery orange-red fins and a great attitude to match. They grow anywhere from 5 to 12 inches, and could originally be found in the Chattahoochee River basin from Columbus, Georgia, upstream to the headwaters.

Land use and hybridization have reduced their range, but you can still find them in the mainstem of the Chattahoochee, upstream of Lake Lanier. These fish prefer flowing water as opposed to lakes and reservoirs.

You can also target Chattahoochee bass in the Dog River, Snake Creek, Centralhatchee Creek, and Hillabahatchee Creek, although many of these fish are hybrids.

Fish the same areas and the same baits mentioned above when targeting these beauties.

The Choctaw bass can be hard to identify and distinguish from other black bass species. Named after the Native American tribe which used to occupy the area in which the new species of bass was found, the Choctaw bass can be seen from the eastern Gulf coastal rivers that initiate in the western Florida panhandle and extend into southeastern Alabama. It is known to occur in the Yellow River, Blackwater River, Choctawhatchee River, Escambia River and the Perdido River.

Many samples taken by scientists have been found in slower backwaters where sediment has gathered and settled. This means that the Choctaw bass tends to favor waters similar to what a largemouth would, as opposed to the moving waters favored by smallmouth and so many other species.

Because of the visual similarities to other varieties of bass, the Choctaw went unnoticed for many years. In fact, DNA testing is required to be absolutely certain you have one in your possession – but there are a few visual cues to look out for. The number of scales in certain areas are said to be unique, and the fin ray count will be different from some of the other basses as well.

Choctaw also have a different number of gill rakers than what you will find on their cousins. Gill rakers are the protrusions along the inside arch of the gill, and the combination of these (slight) visual differences can help you identify this unique species of bass.

Our final rare black bass is the Altamaha bass – yet another resident of Georgia! This fish grows anywhere from 5 to 16 inches long, and they can be found above the fall line in streams that the Ocmulgee, Oconee, and Ogeechee river basins flow into. They can also be targeted in the many forks of the Oconee River and in the mainstem Oconee River down to Milledgeville.

Look for them in the same areas preferred by the Chattahoochee bass – flowing waters near rocky shoal areas.

As you can see, there are several different species of black bass, and for those of you looking for a fishing challenge – look no further. Take a few trips and try to land some of these unique fish, then share a picture or two and make sure to let me know if there are other bass that should be added to this list.