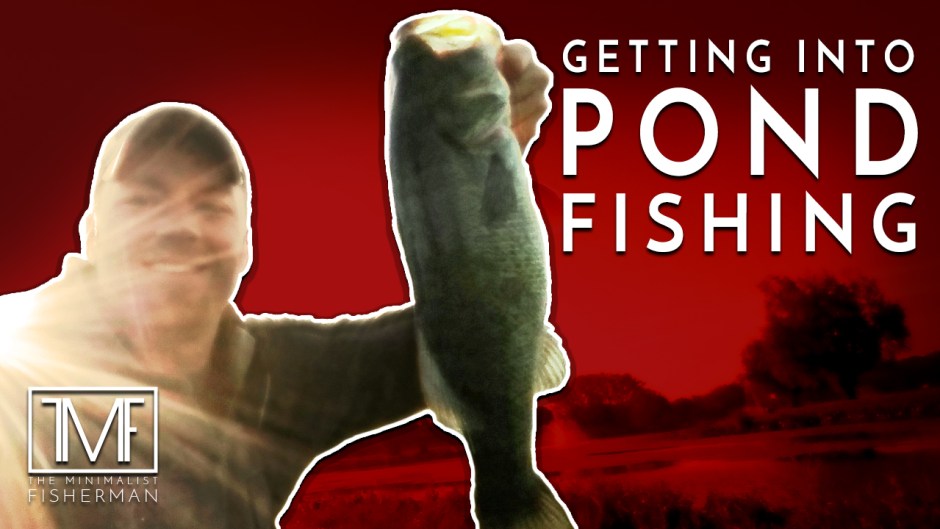 Pond fishing is one of the most accessible ways to get into – or back into – fishing. Chances are there are a few ponds nearby right now that are thriving, and full of low-pressure fish that are eager to bite the right presentation.

Pond fishing is also what got me back into fishing on a regular basis… so it holds a special place in my heart.

Whether you are new to fishing or a veteran that has skipped these smaller bodies of water for some time… consider giving them a look.

In the past I had fished tournaments, high-pressure lakes, creeks, lakes with absolutely no shoreline access that required a small boat with an electric motor and multiple rivers in Illinois. Instead of approaching these adventures as a minimalist, I went at them as… well, maybe what you would call a maximalist. You might even say that I was profligate with my preparations.

IN ENGLISH: I TOOK TOO MUCH CRAP WITH ME.

When I returned from Wisconsin in 2019, I bought my fishing license later than I ever had in the past, and wanted to find a place to fish in Illinois with my sons. Somewhere that didn’t require a boat, because at the time we would be lucky to have 30 or 45 minutes to get out. I didn’t want 20 of those minutes to be me swearing at the trailer.

So I started looking for something that was easy to access, and not extremely popular or loaded with other bank & boat fishermen.

Good News: I found a place!

Bad News: I had no idea how to fish it!

Make sure to hit up the video explanation as well for even more information on getting into pond fishing.

The First Day at The Pond

Allow me to set the stage. Remember I mentioned I started keeping a journal in 2014? Well… I actually started keeping TWO. One for business, and one for fishing. This has been an extremely useful practice and I strongly suggest you start a journal of your own.

September 14th Pond Fishing in IL
“Weather: around 60 degrees – got a start at 6:00 a.m. and left the house at 6:45. The big man was fishing from shore using a Ned Rig with an exposed hook, I had a crankbait that I wanted to practice with, and also a weightless wacky rigged 4″ Ocho like we had been using in Wisconsin. Well, fun fact – the pond is super sludgy, and has all sorts of muck on it – and in it. I tried the crankbait about twice, and found out it was impossible to use. Then we both fished the plastics we had tied on – and nothing. I think I’d like to go back and try 1 pass with a straight topwater frog, 1 pass with a weightless jerkbait like a fluke and a big hook that will be able to move about medium speed, and finally 1 pass with either a weightless Senko or wacky worm (maybe an Ocho again, or a trick worm). I do not think that the bass will hit our bait if it is buried in the muck, or even inhale it off of the bottom – so how can we maximize our time in the strike zone? Gotta be up somehow, and not hung up (super weedless). I’d also consider a drop-shot maybe but that sounds like kind of a pain to manage… let’s try these other ones first.”

What We Learned on Day 1

As a result, I took too many presentations that were the wrong color with exposed hooks that got caught up on everything – and it was just a nightmare. We spent more time cleaning off our hooks than actually fishing!

But it also made me very curious… what was living in here? What were they eating?

The most frustrating thing about the whole day, was that I had let my son down. All he caught was a weed fish (pictured), some pond scum and I believe some old fishing line attached to a bobber. I had failed to put him on fish, and that could potentially leave a horrible taste in his mouth and make him less likely to go again.

We salvaged the morning with a trip to a nearby playground… but I knew that I had to go back to explore the pond again. Alone.

The Second Day at the Pond

I took a few days to think about what I had learned. Remember, time on the water is important, and even if we get skunked, we should be able to learn something about the location, ourselves or the environment. Based on my experience from day 1, I knew that I needed to take a presentation that was going to stay up out of the muck on the bottom, and also free of debris. The logical choice was a topwater… but I had literally zero confidence in topwater presentations.

So what did I do instead?

I made a complicated plan to make myself feel better. Fish a topwater for just 15 minutes, then switch to a toad, then a fluke, then a wacky rig… all in the course of an hour and a half.

Like I said in the last video… that complicated plan ain’t gonna happen!

Interestingly though, these were the notes I added to the journal after I returned that second day… and you’ll see why this triggered something in my brain, and caused me to start taking a more minimalist approach to my fishing gear and plans…

September 18th Pond Fishing in IL
“Weather: around 60 degrees – skies were clear and stable yesterday and last night. I was out the door about 6:30, made it to the pond right after 7:00 a.m. and was immediately able to start throwing a frog. The PLAN… was to fish a frog for 1 lap, a toad for 1 lap, a fluke for 1 lap (weightless) and a wacky rigged Ocho for 1 lap… but I never switched away from the frog. I caught a 2.5lb largemouth back in the “corner” by the bridge under that algae that looks like tiny little green pieces. It’s not super dense, and it was only about a 20 foot wide by 10 foot deep patch of cover, tucked back in the corner of the lake by calmer water. I was just looking for life, saw a heron and some small fish, and the cool thing was as the fish started to move in that shallow water I could literally see the water bulge up on top, so I threw it two more times in the general area and he smacked it and pulled it under. I think I got a good hook set because the algae was so thin. Then about 30 minutes later I missed this guy’s big sister but she was on the opposite side in a little bay kind of across from the parking lot. I turned her after she took the frog, but the bait popped right out, and it was LOADED with thick sludge. So I think what happened was when this bass hit, she took on a bunch of muck as well, and I didn’t get a good hook set through that crap. Absolute heartbreak. Missed another nearby in the same stuff as well, smaller though. Then that was it, I wrapped up about 9:00 and there was never any reason to switch to the other baits – but it was cool to find life here and catch my first legitimate frog fish.“

What I Learned on Day 2

The fish I am showing in the picture was the one responsible for getting me fired up about fishing ponds again. More importantly, this was also the first fish I had caught on a legitimate topwater presentation.

I wish my son had caught it 🙂

So How Can You Apply This to Your Pond and Catch More Fish?

If you’ve read this far, I’m sure that you can see how easy it would be for us to come up with a bullet list and about 15 long-winded suggestions, but in the interest of keeping it minimal, let’s focus on some brief suggestions that you can take and apply to your body of water. Print this off before your next trip and try it out!

Most importantly… have fun, and enjoy God’s creation. Enjoy the fresh air, the wind, the sun, the rain, the hot, the cold – soak it all up. Remind yourself that there are a lot of people that will never experience the simple act of bank fishing – and just as many want to fish but are stuck at work or with some other obligation.

Every trip is a blessing, no matter the outcome.

Now get out and do some exploring of your own, and if this has helped you in any way, make sure to tag me on social media and let me know – I’d love to hear from you.